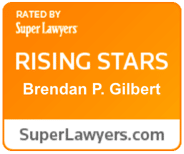 Prior to joining Taylor & Ring, Mr. Gilbert was an attorney at a plaintiff’s trial law firm where he participated in all aspects of civil litigation, as well as appellate advocacy. Most notably, he served as lead counsel on a personal injury arbitration in which liability and damages were disputed, and obtained a near seven-figure award for the plaintiff.