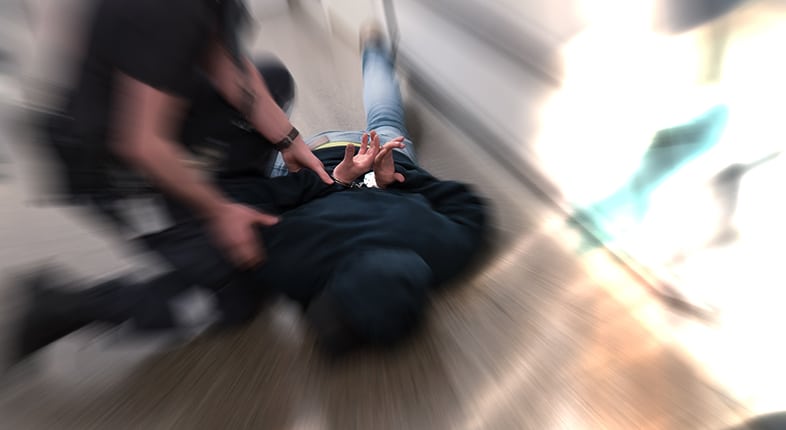 Being taken into custody is a stressful experience, regardless of the reason, circumstances or charges. Los Angeles law enforcement and correctional officers are trained to recognize and respond to inmates in mental or physical crisis, and have a responsibility to provide medical treatment. When they fail to do so and an inmate suffers injury – or death – as a result, our attorneys will take legal action.

It’s no surprise that law enforcement agencies and correctional facilities are reluctant to admit any blame or culpability when a person dies under their watch. However, the Los Angeles police brutality attorneys at Taylor & Ring dedicate themselves to fighting for justice when law enforcement oversteps their bounds and harms your loved one. This behavior is unacceptable and a violation of civil rights. We can help.

The Los Angeles County District Attorney’s office maintains a database and file of every in-custody death in which an officer used force.

Further, 21 people died in ICE custody in the 2020 fiscal year, which is more than twice the number of deaths from the previous year.

This is absolutely shameful. We need only look at the news to see that too many people are dying while detained or in custody across the United States.

When someone dies in police custody due to negligence or inattention, their loved ones may be eligible to file a civil action for wrongful death.

What constitutes an “in-custody” death or injury?

In-custody deaths and injuries can occur from the moment police and authorities confront an individual and throughout the time they spend in prison or detention. A person can be any age, any gender, and any citizenship status.

When someone is detained or taken into custody, the government – whether it be the police, corrections officers, ICE, or juvenile detention – must provide reasonable accommodations for their health and safety. If authorities fail in that responsibility, they can be held liable for any resulting injuries or deaths.

Being in custody doesn’t mean a person is necessarily behind bars. In most cases, police will tell you that you are under arrest or that you are not free to leave the scene.  If you aren’t sure, ask, “Can I leave the [interview, scene, questioning] and continue on my way?” If the answer is no, you are likely in custody for all intents and purposes under the law, and authorities must reasonably protect your mental and physical health from harm.

What rights do prisoners and detained persons have?

Remember, Constitutional rights don’t just go away once a person is in custody, awaiting trial, or has been sentenced to time in jail, prison or any type of detention center. Much of our country has been desensitized to jail and police brutality from seeing it in fictional television shows and even on the news. When we see it both fictionalized and in real life, we run the risk of it becoming normalized. It’s not.

Prisoners and inmates have rights. The American Civil Liberties Union (ACLU) provides a list of prisoners’ rights and resources, including what do to in cases of excessive force, religious discrimination, pregnancy, or disability. The Los Angeles police misconduct attorneys can also provide help and representation.

What causes in-custody death and injury?

Serious and fatal injuries occur in custody in dozens of different ways. However, in cases of wrongful death, they all have one element in common – an intent to cause harm or an act or failure to act resulting in reckless indifference to a detainee’s rights.

Common examples of in-custody abuse and excessive force include:

What are my rights if a loved one dies in custody in Southern California?

The families and loved ones of victims who died in custody may be eligible to bring a wrongful death suit against the responsible party or parties. Depending on the circumstances and details of your loved one’s death, you may take legal action against:

Many private citizens believe that if an internal investigation clears police officers or jail personnel from any wrongdoing, they are unable to bring a civil lawsuit on behalf of their loved one. This is untrue. The wrongful death attorneys at Taylor & Ring have a history of successful results on behalf of victims, even when internal investigations have “cleared” authorities from any criminal action or excessive force.

In fact, internal investigations are a separate matter from civil lawsuits, and in some cases may not even be admissible in court. Our law firm conducts thorough and detailed forensic investigations, performing a much more far-reaching analysis of your case than the authorities are likely to undertake. We advocate for you and your loved one only.

How can a Los Angeles police brutality attorney help me?

When a person dies or suffers severe injury while in custody or being detained, you may feel helpless and angry. Our attorneys can help you get to the bottom of what happened, while guiding you through a complicated legal and administrative process. We will:

Most importantly, bringing a lawsuit can right the wrong your loved one suffered. Further, you can help make the system safer for everyone who comes next and prevent even more police misconduct.

Being in custody, detained or behind bars does not mean a person gives up their Constitutional rights. If you were injured, or a loved one died due to neglect or abuse in custody in Los Angeles, call the attorneys at Taylor & Ring today. We want justice on your behalf. We will listen to your story and offer our evaluation of your legal options. Call 310-776-6390 or complete our contact form today. Your first consultation is free.