Combat veteran Gregory Lloyd Edwards died in 2018 after an altercation with corrections officers at the Brevard County Jail, Florida. At the time, the county medical examiner concluded Edwards’ cause of death was something called “excited delirium and complications,” due to a “hyperactive and violent state with subsequent restraint.” His death was ruled an accident.

However, over the past year, several experts have come forward to voice concerns about this ruling, pointing at the use of a restraint called a “spit hood” employed on Edwards that may have contributed to his death.

What is a spit hood?

Spit hoods are a type of mesh drawstring fabric bag, used by police or corrections officers to protect themselves when an inmate or suspect is spitting or dripping saliva or other fluids. It helps reduce the risk of communicable diseases and viruses when apprehending or disarming an individual. Only trained personnel should utilize spit hoods. 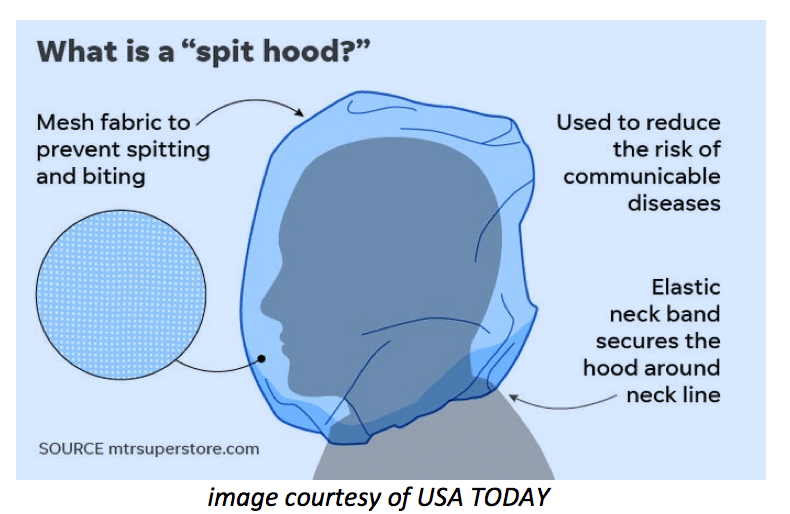 Gregory Lloyd Edwards was a decorated war veteran suffering from post-traumatic stress disorder when he was arrested for assault in December 2018 in Florida. After fighting and resisting deputies at the jail, he was tased and pepper sprayed before being strapped into a chair with a spit hood placed over his head.

Deputies left him alone without medical attention for over 15 minutes before noticing he was unresponsive and barely breathing. Jail personnel were unable to revive Edwards, and his death was ruled an accident due to excited delirium.

Dr. Dan Woodard is a Kennedy Space Center physician who specializes in hypoxia, which is the loss of oxygen in the blood and tissues. He believes Edwards may have actually died from hypoxia caused by a combination of the spit hood and pepper spray, with the pepper spray inflaming his lungs and the mesh hood becoming unbreathable due to mucus and saliva.

Taylor & Ring attorney Neil Gehlawat bolsters this theory: “In general, a spit hood is a device that restricts someone’s ability to breathe,” Gehlawat told FLORIDA TODAY in a recent interview. “If you’re otherwise under duress, and then a spit hood is placed over your head it is going to be even more problematic because it further is restricting your ability to breathe.”

Even though spit hoods are meant to protect officers from disease transmission, Attorney Gehlawat added, “The downside is so significant that so many people can legitimately die when a spit hood is placed over their head. Officers have to justify the use of restraint devices.”

In the case of George Edwards, the spit hood was ordered thrown away while the holding cell was cleaned after his death, so there is no evidence to review. Without the hood as evidence, there is little proof of whether what happened to Edwards was accidental, intentional, or a failure to follow protocol.

At Taylor & Ring, our attorneys are dedicated to preventing police brutality and misconduct. We represent victims of police violence and fight for justice on your behalf.  To arrange a consultation with a Los Angeles attorney, call our team today at 310-776-6390, or fill out our contact form.