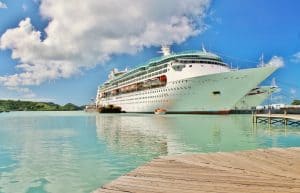 A former Royal Caribbean International employee who suffered a catastrophic injury while working on board the ship in 2008 has been awarded $20.3 million for her injuries. While working at her job as a marketing manager on the cruise line’s Voyager of the Seas, Lisa Spearman experienced severe injuries to her hand during a fire safety drill.

According to the Miami Herald, the ship was in port in August 2008 conducting a routine drill, in which some of the ship’s semi-watertight doors are closed. These doors are retractable, extremely powerful and prevent water from flooding the ship in the event of an emergency. A nurse, a non-employee from the port who was unaware of the drill, attempted to open one of the doors while Spearman was on the other side.

As the nurse attempted to pass through the door, she fell, and Spearman tried to help her. However, when she put her hand on the handle to keep the door open, it retracted back into the wall, crushing her hand into a space only big enough to fit a pencil. Her hand was pulled into the space three more times, breaking two fingers and ripping her nails from her cuticles. She now has chronic pain and suffers limited movement and disfigurement in her hand from her injuries.

History of negligence by Royal Caribbean?

Spearman’s lawsuit argued that Royal Caribbean was negligent in training its staff. It alleged that crew members were not trained to operate the type of door that crushed Spearman’s hand, and that the nurse was not informed by the crew at the port that a security drill was taking place at the time she boarded the ship.

According to information provided by Royal Caribbean during discovery for the case, 12 other crew members suffered hand injuries in the three years prior to Spearman’s accident under similar circumstances.

After her injury, the cruise line sent Spearman to a doctor in Barcelona who misdiagnosed her injury and splinted her fingers in the wrong direction, exacerbating the damage to her hand. She underwent therapy in her home country of New Zealand for two years while receiving a daily disability payment of $25, according to her employee disability coverage. She was later diagnosed with chronic pain syndrome, post-traumatic stress disorder, and is unable to properly move the fingers on her right hand.

In 2010, Royal Caribbean discharged her from job, with the explanation that because of her injury, she could not perform necessary safety tasks that require lifting 50 pounds. Spearman filed her lawsuit in Miami-Dade County in 2016.

The lawsuit alleged Royal Caribbean was negligent with the door, did not provide proper medical treatment, discharged her for non-performance reasons, broke her contract, and failed to pay her full wages.

The jury trial lasted three weeks and ended in early June, with the court ordering Royal Caribbean to pay Spearman $20.3 million for future medical bills, lost wages, and other damages.

If you suffer a catastrophic injury, you should have peace of mind knowing that your medical bills and losses will be taken care of. And, your employer should always have your safety and best interests in mind. When this is not the case, the injury attorneys at Taylor & Ring can help you secure compensation. Talk to our Los Angeles lawyers today at 310.776.6390 or complete our contact form to schedule a consultation.