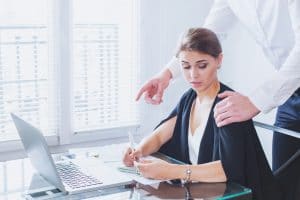 Have you experienced the situation in your workplace in which your boss or someone in authority over you, or even a coworker, persistently makes unwanted sexual advances? You may have told the perpetrator to stop numerous times, but he refuses. You may have even filed a complaint with your company’s human resources department according to your company’s policy, but it has done nothing to change the situation.

Now, finally, you may have considered filing a lawsuit. However, after meeting with an attorney or looking into the issue carefully on your own, you have discovered something disturbing. The employment agreement you signed when you were hired forces you into arbitration with this type of matter instead of allowing you to take the matter to court.

What is forced arbitration?

Obviously, arbitration of this nature gives the advantage to employers to be dismissive about sexual-harassment complaints. However, fortunately, Congress has proposed a bill with bipartisan support that is intended to solve this problem for victims of sexual harassment in the workplace.

In September 2019, the House of Representatives passed a bill that would give millions of American consumers and workers important legal rights.

The legislation which passed the House 225 to 186 is referred to as the Forced Arbitration Injustice Repeal (FAIR) Act. It forbids companies from requiring consumers and workers to work out legal disputes through arbitration in a private setting – a setting which has no jury, no judge, and almost no government supervision.

Arbitration clauses, which are common in consumer and employment contracts have made it impossible  for workers to file lawsuits against their employers in court for sexual harassment and other harmful actions such as wage theft, racial discrimination, etc. Workers tend to receive much less compensation through arbitration than they are able to receive in court – that is, if they win anything at all through arbitration.

The FAIR Act, if it became law, would not only ban mandatory arbitration clauses in contracts with consumers and employees, it would make void current arbitration agreements that have previously been signed, but only for disputes that arise after the law is implemented.

Millions of workers are not allowed to sue their employers

Mandatory arbitration agreements are often buried deep in hiring documents which employers require new employees to sign. This affects the rights of tens of millions of Americans to go to court. Some of the largest corporations in the United States require all or many of their employees to sign these agreements.

Many women coming forward with claims of sexual harassment end up finding out they are barred from taking their case to court because they have previously signed an arbitration agreement.

The challenge is to get this bill through the Senate. Some Republican Senators, including Lindsey Graham (R-SC) have expressed interest in reducing forced arbitration.

If the bill eventually becomes law, it will give workers and consumers who have signed these arbitration clauses immediate access to the courts.

At Taylor & Ring, we understand the disturbing nature of sexual harassment and what it can do to a person and his/her family. Our skilled, experienced, and compassionate Los Angeles sexual harassment attorneys are here to support you and fight for your rights to compensation under the law. To set up a free case review, call our law office today at 310.776.6390, or explain your story to us through our contact form.