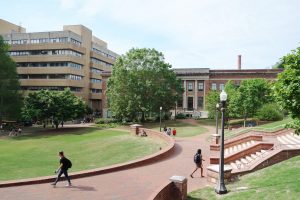 Governor of New Hampshire Chris Sununu recently signed the nation’s first student-written campus sexual assault legislation into law. Passing the NH House with bipartisan support, proponents of the bill are not only calling it a victory for New Hampshire, but a victory for college students all over the country. Survivor and advocate groups are hoping this legislation becomes a national model.

The “Every Voice” Bill

The new law (HB 705), also called The Every Voice Bill, mandates a number of requirements for all colleges and universities to help fight and prevent sexual assault and misconduct, including:

The Every Voice Bill is the first law of its kind in history in New Hampshire, as well as one of the most comprehensive bills addressing campus sexual violence in the country. Additionally, the Every Voice coalition filed similar bills in Massachusetts, Connecticut, Hawaii, and Illinois, and plans to file in upcoming sessions for Maine, Nevada, New Mexico, and Virginia. Their hope is to eventually have standardized protections in place for all institutions of higher learning across the country.

As the RAINN organization says, sexual violence on campus is pervasive. In fact, 11.2 percent of all students (undergraduate and graduate) experience rape or sexual assault through force, violence, or incapacitation. Just among undergrads, 23.1 percent of women and 2.2% of men experience rape or sexual assault. Other statistics on campus sex assault from RAINN include:

The co-chair of Every Voice New Hampshire, Sophia Miller, is about to enter her junior year at Dartmouth. She told the New Hampshire Union Leader, “I think personally we’re just so incredibly happy to see this bill be passed and it’s also kind of validating. Having these protections is so important.”

The attorneys at Taylor & Ring fight for the rights of campus sexual assault survivors throughout California. Don’t hesitate to reach out to us if you need help – we’re here for you. To arrange a consultation with a Los Angeles sexual assault attorney, call our team today at 310.776.6390, or fill out our contact form.