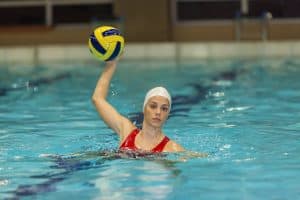 A water polo coach in Orange County is facing dozens of charges after authorities allege he sexually abused underage female players. Bahram Hojreh, 42, reportedly abused the athletes during one-on-one coaching sessions at the International Water Polo Club in Los Alamitos, California, between September 2014 and January 2018. At an arraignment hearing on April 4, 2018, he pleaded not guilty to all charges.

Hojreh allegedly sexually abused seven female athletes, four of whom were 15 years old or younger at the time of the abuse. He faces nearly two dozen felony and misdemeanor charges, including lewd acts upon a child and sexual battery. He’s accused of touching the girls’ breasts and genitals, coercing the minors to touch his genitals, and digitally penetrating them.

Hojreh pleaded not guilty and his attorney, Ricardo Nicol, said his client “adamantly denies” the allegations.

“A guy that has been involved in the sport for 30 years, who has an impeccable reputation, who has been entrusted with hundreds, if not thousands, of kids, he suddenly becomes a serial groper in the pool?” Nicol said. “Hopefully the truth wins out. But to me, there is something here that is not adding up.”

Girls reported abuse to their parents

Authorities became aware of the alleged sexual abuse when two of the athletes told their parents what was happening to them. Their parents reached out to Child Protective Services (CPS) and reported the incidents. CPS, in turn, contacted the Los Alamitos Police Department, who opened an investigation. During this investigation, authorities identified five additional victims.

The International Water Polo Club was barred from using the pool during the entirety of the police investigation, and Hojreh was not allowed to enter the premises. Additionally, Hojreh’s membership with USA Water Polo was suspended, along with his coaching position.

In the wake of the Larry Nassar scandal at USA Gymnastics, which has seen much of its senior leadership resign due its mishandling of sexual abuse allegations against Nassar, many U.S. youth sports organizations are re-examining the ways they protect their members from sexual abuse. The US Center for SafeSport was founded to respond to allegations like those made against suspected abusers like Hojreh.

Christopher Ramsey, the CEO of USA Water Polo, stated in an email to the organization, “The center was established to respond to allegations such as those made in reference to Mr. Hojreh, and we fully support the center in its efforts and fully cooperate with the center in enforcing any sanctions that the center may impose. USA Water Polo has zero tolerance for sexual misconduct.”

Hojreh was released on a $250,000 bond. He’s set to appear in court for a pretrial hearing on June 14. If convicted of all charges, he could face up to 13 years in state prison and 10 years in county jail.

Child sexual abuse is a devastating crime, especially when it happens under the care of an authority or coaching figure. These cases are challenging and sensitive. If your child has experienced sexual abuse, the Los Angeles attorneys at Taylor & Ring can help. Call us today at 310.776.6390 or complete our contact form to schedule a consultation.