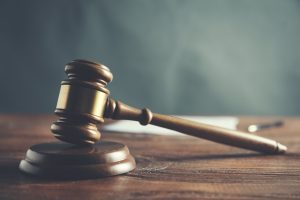 Dave Ring, partner at Taylor & Ring, is representing a victim of David Lamb in a lawsuit against Lucia Mar Unified School District (LMUSD). Lamb, who “was convicted in 2018 of two counts of committing lewd acts against a child and sentenced to 16 years in state prison,” had previously been arrested for peeping (a misdemeanor conviction), per the San Luis Obispo Tribune. He omitted that conviction on his original application, “but for reasons unknown, David Lamb was allowed to submit another application and was hired…. The second application four months after the first again misrepresented the conviction, but was accepted by the district, records show.”

Dave Ring and Robert May, of The May Firm, are representing the victim in a civil lawsuit against LMUSD. Through the discovery process, the lawsuit has revealed that LMUSD failed to follow its own rules when it hired Lamb, and then concealed information regarding a transportation supervisor who had encouraged Lamb to reapply for the position.

“The school district went out of its way to conceal that Lamb was disqualified from ever being a bus driver for lying on his application about his criminal history,” Dave Ring told the San Luis Obispo Tribune. “The school district hid it, concealed it, and prayed to God it would never come out.”

David Lamb is a sexual predator; LMUSD enabled his behavior

When the victim’s family reported Lamb to LMUSD in 2017, the district didn’t believe the victim’s story. Det. Devashish Menghrajani of the San Luis Obispo’s Sheriff’s Office testified in 2018 that “a transportation supervisor reviewed some of the bus footage in conducting the district’s investigation,” and concluded there was nothing to see. “Her conclusion was there was nothing there … based on the limited information she was looking at” Menghrajani said. “This lady’s not trained — they just looked at a few videos. They didn’t look at all the data. They didn’t believe (the alleged victim). (The supervisor) assumed the victim wasn’t telling the truth.”

Though the family went to LMUSD officials on two separate occasions about what had happened to their daughter, the district continued to dig in, saying nothing had happened. So, the family went directly to the San Luis Obispo’s Sheriff’s Office, which arrested Lamb within a week.

Why is the family suing LMUSD?

LMUSD failed in its duty to protect its students in a most egregious way. By lying on his initial application about the peeping conviction, Lamb should have been disqualified from ever being hired by LMUSD. But LMUSD failed to follow its own rules, putting countless students at risk of sexual abuse by the bus driver.

Further, LMUSD did not report the allegations of abuse to law enforcement, as is required by the Child Abuse and Neglect Reporting Act (CANRA), but actively attempted to dissuade the victim’s parents that any abuse had happened at all. This is despite reports submitted by a former principal and former instructional assistant at a different LMUSD school, Grover Heights Elementary, that a different student with special needs was showing signs of trauma, including “a noted increase in banging her head, inappropriate behavior, and crying when she needed to get on her afternoon bus,” after coming in contact with Lamb. Those reports appear to have been ignored, too.

LMUSD had multiple reports of potential or alleged abuse coming in from multiple schools, yet never took any steps into protecting students from Lamb. “Every step of the way, Lucia Mar either engaged in gross negligence, intentional cover-ups, or just flat-out lies in order to protect the school district’s reputation as opposed to taking steps to protect these kids on the special needs bus,” Dave Ring said.

LMUSD also has a history of covering up bad behavior by its employees. It withheld materials in the sexual abuse cases against former Nipomo High School girls’ wrestling coach Justin Magdelano in 2018, as well. What is happening with our client is just another time when LMUSD has put its own reputation ahead of the safety of its students.

We say enough is enough. LMUSD has established a pattern of gross negligent behavior and skin-saving maneuvers. The time for justice is now: for our client, for Lamb’s other victims, and for all the students who have suffered harm because LMUSD failed to do its job and protect its kids. The only reputation LMUSD has earned is that of a safe haven for sexual predators. We say it’s time to fix that once and for all.

Taylor & Ring has always fought, and will always fight, for justice for victims of sexual abuse and assault. We have secured hundreds of millions of dollars from school districts who won’t protect their students. If you or your loved one was a victim of sexual abuse, assault, molestation, or harassment by an LMUSD employee or contracted worker, we want to help. Please call 310-776-6390 or complete our contact form to schedule a free, confidential consultation. Proudly serving Los Angeles and Southern California.