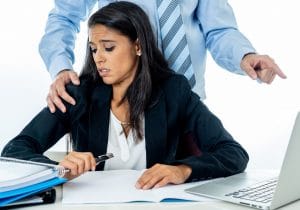 The U.S. National Institutes of Health (NIH) recently established new guidelines for monitoring complaints involving sexual harassment responsible by scientists who financially support the agency. The guidelines, issued in June 2020, cover the actions the agency must take when it becomes aware of allegations of sexual misconduct. These include preventing the issuance of pending grants, preventing scientists from sitting on peer review panels, and denying requests from universities to transfer funding to other educational institutions when a sexual harasser obtains a new position.

Now, universities must inform the NIH when substantial modifications are made to a grant as a result of an investigation into scientists who cause a sexual harassing, abusive, or otherwise unsafe and hostile work environment.

Sexual harassment can have devastating effects on a woman’s educational and professional achievements, as well as her physical and mental health. The workplace environment in academia has the unsavory dishonor of possessing the second highest rate of sexual harassment among workplaces. Nearly six in 10 women in the academic workplace report experiencing harassment. This comes in just behind the military, in which seven in 10 women have experienced harassment.

The NIH provides financial backing to researchers at thousands of institutions across the nation operating in the STEM (Science, Technology, Engineering, and Math) arena. The agency’s working group initially came together in February 2019 to create a series of recommendations to outline how the agency can best solve the problem of sexual harassment. It should be noted that in the months since the report was issued, the agency has made little progress, only addressing about one-third of the recommendations.

Prior to the announcement of these new guidelines in June 2020, the NIH was already accumulating information in 2019 regarding investigations of sexual harassment at various institutions. However, the previous disclosures from these institutions had been provided on a voluntary basis. The new guidelines make sexual harassment claims and investigations equivalent concerning fraud, research misconduct, peer review integrity violations, and foreign influence.

Some are still concerned that the success of the new guidelines depends too much on the good faith of universities that receive funding from the NIH. The thought is that these institutions may be heavily discouraged to report instances of sexual misconduct among scientists and other individuals for fear of losing those funds.

A suggested first step is to break the silence regarding sexual harassment in STEM and other industries. The second step is to address reputation and standing. For instance, if sexual harassment is proven, not only should the perpetrator or protector of the perpetrator expect to be fired and sued, but also lose industry opportunities such as peer-reviews, grants, licenses, etc. When reputation is affected, behavior needs adjusting, at least to some degree.

Universities, companies, and other organizations also need a best-practice sexual harassment policy that protects the rights of sexually harassed and assaulted victims, while also giving due process to the accused. Finally, stronger reporting is needed. For example, in 2018 the National Science Foundation (NSF) began mandating universities report within 10 business days any discovery that a scientist funded by NSF committed sexual harassment. NIH operates under different rules that do not make reporting mandatory unless a grant status changes. Further, the agency is not authorized to compel institutions to report sexual harassment investigations or the results of those investigations except within the grant update process.

If the problem of sexual harassment within STEM and other industries is not sufficiently diminished, it will continue to chase away some of the most intelligent and needed minds our nation needs. This means we need to ensure that women can freely operate in a harassment-free environment ,so they can conduct research and other important skills productively without fear of abuse.

Have you suffered sexual harassment or abuse in the workplace? The Los Angeles sexual assault lawyers at Taylor & Ring are committed to helping you recover your dignity and pursue the justice and monetary damages you are owed. We serve clients in Southern California with highly experienced representation. To set up a consultation about your case, call us today at 310.776.6390, or leave us a message through our contact form.