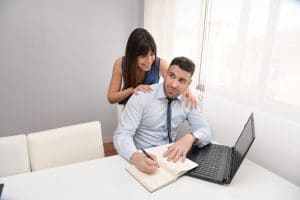 The subject of sexual harassment virtually always conjures up thoughts of a man preying on a woman’s vulnerable position. It can happen at work, walking down the street, in an educational setting, at the gym, or even in a place of worship. When rumors start to fly, the perpetrator is almost always vilified, and rightfully so. What happens if we flip the script and suddenly the woman is the aggressor who relentlessly pursues a male coworker to the point of making him uncomfortable to even occupy the same workspace?

Very rarely are women thought of as being predatory, but they are, and often under very much the same circumstances as when men display the same behavior encompassed by sexual harassment. A study conducted by Penn State University in 2015 showed that there was virtually no difference between men and women when it comes to reinforcing attitudes about gender inequality, and therefore sexism has flourished in both directions, not just the sexual harassment of women by men.

The numbers are higher than you think

In 2018, the Equal Opportunity Employment Commission (EEOC) disclosed that nearly 20% of all sexual harassment claims reported in the workplace came from male employees. With reports of sexual harassment of men on the rise, the reporting rate is still lower than the number of incidents. One reason being that men also have concerns about the stigma they endure. Other colleagues and friends, including women, taking jabs at their masculinity when they complain about being preyed upon by a woman causes embarrassment.

There are key factors in why women sexually harass men. They include:

Reporting is tough, but not reporting can cause you additional harm

Although it may be an inappropriate annoyance, many men simply don’t consider sexual harassment by women as threatening so they don’t report it. Regardless of how dangerous male victims feel the situation may or may not be, the behavior is still not okay and can escalate. If you are a victim, reporting it through the proper channels may help by creating a record in the event you eventually feel unsafe or experience psychological harm as a result.

Men who go through being sexually harassed by female aggressors can encounter a variety of difficulties, such as:

Women who commit sexual harassment can eventually go on to commit sexual assault just as men do. It’s a problem that men have been uncomfortable bringing to the surface because of our culture instilling the idea that men have to be pillars of strength and that showing emotion equals weakness. Female attackers count on this stereotype to get away with damaging criminal behavior.

Until women are seen in the same light as men when it comes to perpetrating sexual harassment and sexual assault, the conversation won’t change much. Women are typically viewed only as victims, but they’re equal opportunity assailants. It’s just not talked about as much as it should be in order to change the perception that men are equally victimized.

Sexual harassment is a two-way street and the fact that it happens to a man doesn’t minimize the seriousness of the behavior. It’s still illegal, it’s still just as harmful, and men deserve to go to work in safe environments just like anyone else.

Taylor & Ring recognizes that sexual harassment of anyone, regardless of gender, should never happen and that feelings of shame can make it all the more difficult to pursue justice. To schedule your free case consultation with one of our supportive Los Angeles sexual harassment attorneys, call us at 310-776-6390, or tell us your story by reaching out to us through our contact form.