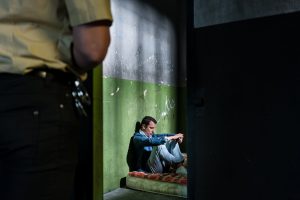 If you have been sexually assaulted by prison staff or officials, you have a right to pursue both a criminal case to punish your abusers and a civil claim for the damages inflicted on you. The harmful psychological effects of rape can take years to move past, even with proper treatment.

How big of a problem is rape in prison?

Based on a study conducted by the National Prison Rape Elimination Commission, rape is a vast problem in American prisons. An anonymous survey showed an estimated 200,000 inmates are sexually abused in our detention facilities every year and the number of reports have been rising.

But here’s the issue: when people think of “prison rape,” they often assume it only happens between prisoners. In truth, as many as 50% of all prison rapes may be committed by the guards themselves.

Is it legal for prison staff to have sex with inmates?

The answer to this question is a resounding “Now,” even if the prisoner were a willing participant. Prisoners are entitled to serve their time free from being compelled to engage in a sexual relationship by psychological manipulation, coercive threat, or physical force.

In fact, the power dynamic where inmates are at the mercy of corrections officers and prison staff led to the Prison Rape Elimination Act (PREA) in 2003. This federal law prohibits sexual relationships between prison officials and inmates, classifying it as criminal sexual abuse because inmates have no ability to legally consent to a sexual relationship of that nature. Legally, it is akin to sexually assaulting a vulnerable adult who doesn’t possess the mental capacity under the law to make his or her own decisions.

Anyone convicted of this crime may end up in a federal detention facility serving a sentence as not only a former member of law enforcement but as a sex offender.

What can I do if I’m sexually assaulted in prison?

You have the ability to file a civil suit against prison officials, all corrections officers involved, and even the prison itself for failing to protect you. You can also press charges in a criminal complaint, though the District Attorney will have final say over whether those charges are filed.

If you are an adult who was sexually assaulted by corrections staff or officials, or you are an adult survivor of childhood sexual assault while you were in juvenile detention, you may still be have time to go after those who caused you harm. You could be entitled to an award for:

Speak with the Los Angeles sexual assault and abuse attorneys at Taylor & Ring to learn your legal options for holding your abusers accountable. Schedule your free confidential consultation today by calling us at 310-776-6390, or we invite you to reach out to us through our contact form to tell us your story.