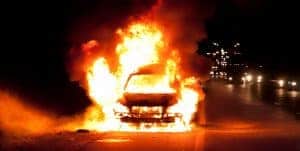 Hollywood makes it seem like being trapped in a burning car is a regular occurrence, with even the most superficial auto accident leading to a roaring inferno. A recent police chase in South Los Angeles resulted in a car exploding while the suspect fled into the comparative safety of police custody.  The car fire closed a major highway for nearly two hours. So car fires are a legitimate concern, and roughly 4 people per week in the US die in a car fire. However, the reasons why a car might emit smoke, and knowing which colors of smoke indicate imminent danger can help drivers make safer decisions, potentially saving lives.

Where is the smoke coming from?

If the car you are driving is emitting smoke, the first issue is to determine the general source. Smoke from the exhaust is a concern; smoke from the engine compartment is a critical emergency. If you see smoke of any color coming from the engine bay of your vehicle, you should stop driving immediately, move far away from the vehicle, and contact emergency services as soon as possible.

The different colors of smoke can mean different things

Exhaust smoke, while concerning, is less of an imminent danger, at least in regard to fires and explosions. It can, however, signal serious damage having been done or currently happening to the vehicle, possibly as a result of a lack of maintenance or a defective part. Knowing which colors of smoke are serious and which can wait while you drive to the mechanic’s garage can be very helpful. The following colors all refer to smoke coming from the exhaust of the vehicle, because any smoke emerging from the engine compartment is an emergency.

Whether a car fire resulted from improper maintenance, a car accident, or the failure of a defective part, the danger to other motorists is grave.  If you were injured by a car fire, place your faith in a law firm with a long history of supporting auto accident victims across Southern California. Call Taylor & Ring today at 310.776.6390 or complete our contact form to schedule a consultation with a knowledgeable Los Angeles car crash lawyer.