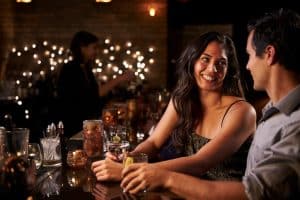 While it can be challenging to find recent, reliable statistics about the number of drug-assisted sexual assaults, the prevalence of social awareness, the proliferation of new club drugs that double as date-rape drugs, and the lack of widely available drug detection devices have all contributed to a recent rise in date rapes facilitated by chemicals. There is a perception that these substances are usually slipped into a drink, but the reality is that even willingly ingesting alcohol can qualify as a drug-assisted sexual assault. What can be done about this issue and whose responsibility is it?

Every few months it seems there is a Kickstarter request, Indiegogo campaign or Facebook post about a new device designed to alert victims to the presence of common date rape drugs in a drink: Color changing cups, straws, coasters – even nail polish. However, due to the wide variety of drugs used for date rape, not one product will suffice. An option that tests for the most common date rape drug would be useless, as alcohol is both legal and willingly consumed in some circumstances. Because GHB, another common drug associated with sexual assault, is both used a licit medication and undetectable when mixed with dairy, grapefruit juice, or plain water, the idea of claiming to alert people of ingestion could never be close to a certainty, leaving the manufacturers open to liability.

Prevention means being vigilant and creating a cultural shift

Delineating the lack of technological successes at preventing drug-assisted sexual assault is less productive than addressing realistic solutions. Experts emphasize that simply teaching men and women who fear victimization to be hyper alert to the location of their beverages is not enough, as it places the burden of rape prevention on the victim. This type of thinking informs old tropes of victim blaming, i.e. she or he did not adequately protect their drink, but not only is such blaming extremely hurtful and emotional damaging to survivors of sexual assaults, it doesn’t address the root issue: teaching all citizens, male and female, about positive consent. As per RAINN (the Rape, Abuse & Incest National Network), positive consent cannot be given by a person in any way incapacitated by a substance. Other critical components of this model of consent include the following concepts:

If all sexually active adults were inculcated with this simple but effective mindset, that anything other than enthusiastic consent on the part of a sexual partner is not acceptable, then the necessity for designing new date rape drug detection technology or strategies to avoid sexual assaults would be eliminated or at the very least greatly reduced. Given that the sexual assault rate in the US has remained steady for nearly 10 years, a change is needed on the part of all members of the community to solve the issue of sexual assault, drug-assisted and otherwise.

Making the decision to pursue legal action after a sexual assault is extremely brave, and will benefit others, as more than half of all alleged rapists have a prior conviction. The Los Angeles sexual assault attorneys of Taylor & Ring are dedicated to providing you with civil justice representation that is transparent and empathetic. Call us today at 310-776-6390 to schedule a confidential consultation or complete our contact form.