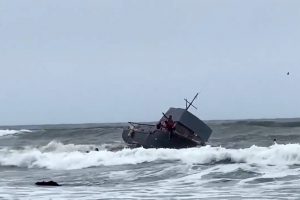 A “smuggling vessel” hit a reef off the coast of San Diego on Sunday, May 2, killing three people and injuring two dozen others. The incident occurred in Point Loma, which leads into San Diego Bay. A dive team couldn’t enter the waters because of severe weather. The boat was broken apart into hundreds of pieces. Rescuers did not know how many people were aboard the vessel because there was no official record.

“(Smugglers) don’t care about the people they’re exploiting, all they care about is profit. To them, these people are just commodities,” Jeff Stephenson, a Border Patrol agent, said at a press conference.

According to U.S. Customs and Border Protection, the pilot of the boat is a United States citizen. The passengers were residents of Mexico and Guatemala who did not have legal status in the United States.

Human trafficking in the U.S. is a larger problem than originally thought

Human trafficking is a covert operation worldwide. Because it is so secretive, it makes the job for law enforcement more difficult when determining how big of an operation they are dealing with at any given time. State law enforcement records likely only reflect 10% of the victims trafficked across the country at any one time.

Amy Farrell is the associate director and associate professor of Criminology and Criminal Justice at Northeastern University. Her research has found that human trafficking in the United States is a larger problem than what data shows. Farrell said that when victims of human trafficking are rescued, they likely want to focus on getting their lives back in order and not assisting with an investigation into their captors.

“People who have been victims of human trafficking aren’t necessarily interested in furthering a police investigation into their captor when they need housing and medical treatment, and a job,” Farrell said.

To better understand how few cases are actually investigated when it comes to human trafficking, we have sourced data from the U.S. Department of State from 2018 and 2019:

The FBI did not start tracking human trafficking data in each state until 2013. California, according to the State of California Department of Justice, is “one of the nation’s top destination states for trafficking human beings.”

The problem with tracking data in trafficking cases

Human trafficking cases are difficult to track not only because of the skill of the smugglers, but because of the ways their victims have historically been treated. When the FBI began tracking this data, many law enforcement agencies did not have an option in their systems to record human trafficking. Instead, the agencies had to classify the incident as another type of crime.

“If a state crime reporting system literally doesn’t have a box to check that classifies something as human trafficking, all those crimes have to be classified as something else,” Farrell said, which leads to sex trafficking cases being misclassified as prostitution. When this occurs, the victim can wind up being investigated for the commission of a crime instead of receiving the help that a victim should receive. “This results in major misclassification of trafficking cases and leads to an incredibly massive undercount,” Farrell said.

The silver lining here is that more and more states are passing laws that provide post-conviction relief for victims. In California, survivors may petition to have their records cleared entirely, provided they were convicted of non-violent crimes associated with their trafficking. They also have the right to sue their traffickers and any associated third parties who enabled the trafficking (like a hotel, for example) for damages in civil court.

Farrell’s research shows that labor trafficking can be even more difficult to track than human and sex trafficking, but that may be an unfair comparison. When women, men, and children are forced to perform commercial sex acts, that is a type of labor trafficking. According to EndSlaveryNow.org:

Many times, people from these communities are offered false employment opportunities in major cities. For example, men and boys are sent overseas to work in construction and agriculture but are also forced to perform commercial sex acts. Women and young girls may be offered jobs as models, nannies, waitresses or dancers. Some traffickers operate under the guise of agencies that offer cross-country dating services. However, upon arrival, these individuals are abused, threatened and sold in the sex industry.

Often, traffickers keep victims under their control by saying that they’ll be free after they pay their debt. The “debt” is supposedly incurred from the victims’ recruitment, transportation, upkeep or even their crude “sale.” Thus, sex trafficking may occur within debt bondage/bonded labor.

How to spot a victim of human trafficking

The U.S. Department of State provides the following red flags, which are not exhaustive, that could signal someone is the victim of human trafficking:

If you come across someone you believe is the victim of human trafficking, try asking them the following questions:

After observing the red flags and asking the above questions, you should contact law enforcement immediately if you believe the person you came in contact with is a victim of human trafficking. You can call 911 to alert the local authorities or you can call the National Human Trafficking Hotline at 1-888-373-7888.

Do you know someone who is the victim of human trafficking? Were you a victim of human or sex trafficking? The compassionate and experienced Los Angeles sex abuse lawyers at Taylor & Ring can investigate your situation and help protect your rights as a victim. Call our office at 310-776-6390 or complete the contact form on our website to schedule a free consultation. We work with clients in Los Angeles and throughout Southern California.